There are plenty of reasons to use metal stud framing instead of wood studs. If you’ve been put off doing a project because of dust, noise or delivery problems, steel studs might be the perfect answer for you. 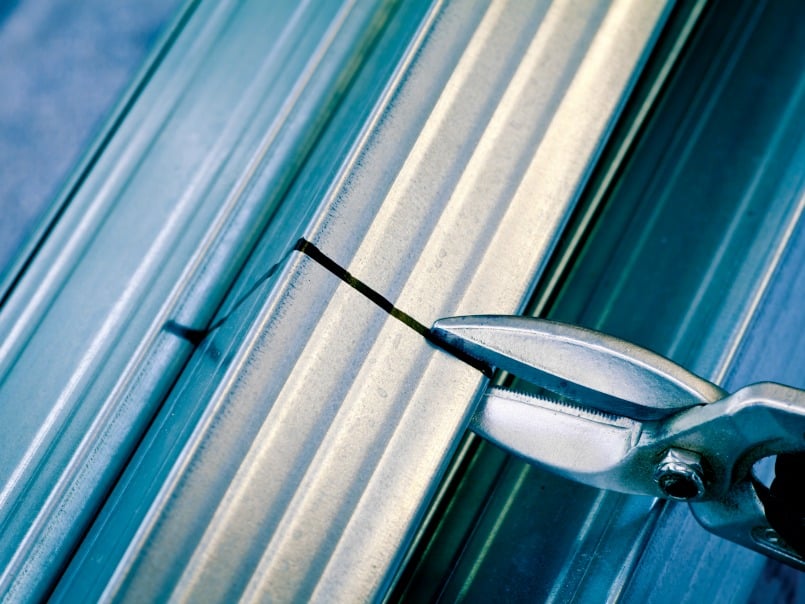 I’m not saying that steel studs are right for every circumstance. They’re not. They’re not the right choice for a bearing wall in a wood frame house.

But, if you live in a high rise condo, your partitions are probably framed in steel. If you’re finishing a basement, steel drywall framing might be perfect for you.

The advantages of metal stud framing

Steel doesn’t swell and shrink because of moisture. Wood studs do. Why do we care? Because the swelling and expansion is one of the reasons that the compound covering the sheetrock screws pops out.

And steel stud framing is a great choice if you’re finishing off a basement or a bathroom where moisture could potentially be a problem. The screws may rust but the track and studs won’t.

Cutting studs is quiet work: no power tools needed. So you might be able to work later into the evening. And let’s not forget, you won’t have to clean up any sawdust from cutting studs!

Best of all, steel studs are less expensive than wood.

If you’re new to steel framing, the work will go slower at first. It does take some getting used to. You’ll even have to think differently about how framing is done.

But there are time-savers too. Loading in the materials will go faster. You can carry a bundle of ten steel studs fairly easily. Not too many people can carry ten wood studs around!

It’s easy to join steel studs together to make them longer. This is often a problem in a building where the ceilings are high and the elevator isn’t tall enough to take in the length of stud you need.

You can use a piece of track as a joining plate to connect two shorter pieces of stud. That’s a lot simpler than trying to do the same thing with wood studs.

If you haven’t used metal framing, you might not be familiar with the parts and tools you need. But it’s not complicated.

To cut the track and stud use aviation snips. Cut the sides of the track or stud first, bend backwards and cut through the web.

For a typical steel stud wall, you’ll need track for the top plate and bottom plate. Track comes in 10′ lengths. Studs come in 8′ lengths and then in 2′ increments up from that.

The tracks go in first and then the studs slide into the tracks. And then they’re screwed in place.

You’ll need zip screws to connect the framing pieces together. Learning to use the screws can be frustrating in the beginning. If you’re used to hammering nails, you won’t get the same satisfaction from screwing metal studs to track!

These clamps make it much easier to hold track to stud while you’re driving the screws.

Pro Tip: When you’re cutting studs, cut them a quarter-inch short of the total height. With wood framing the studs have to fit tightly between top and bottom plates. Not with metal stud framing.

The studs shouldn’t be forced into place. Leave them short, clamp them to the track and then screw the stud to the track.

If you’re going to frame out some soffits, metal  and ceilings get some 2″x2″ corner angle.

Then hang sheetrock off the angle mounted to the ceiling, screw another angle onto the inside of the sheetrock at the same height as the angle on the wall.

The most common lengths of screws for hanging sheetrock are 1″ and 1-1/4″. In the beginning, screwing sheetrock to metal studs isn’t as easy as to wood studs. It’s just different. The steel studs aren’t as rigid as wood studs are.

If you’re going to hang solid core doors, then plan on making the metal stud opening large enough so you can line it with 3/4″ plywood. That’ll make it easier to mount the door frame. And it’ll also stiffen the wall at that point.

Also, let your sheetrock run through any doorways then come back and cut the sheetrock once you’re done on one side of the partition.

Installing wood trim is going to be different also. For baseboard and casings get yourself some trim screws. The square-head type give a more positive grip with the screw tip of a screw gun. The most commonly used lengths are 1-5/8″ and 2-1/4″ screws.

A screw gun works better than a drill for screwing into steel. But, if you’re just going to use the steel studs occasionally, you don’t need to go out and buy a screw gun. But, you should have a screw setter so that you can control how deep the screw penetrates the sheetrock. You want to avoid letting the head of the screw go past the paper surface of the sheetrock.

You might approach your first steel framing job warily. But, put in some time with it and you’ll have a new way to solve DIY problems!

Good luck with your project!

I help homeowners to create high design on a low budget.

We are a participant in the Amazon Services LLC Associates Program, an affiliate advertising program designed to provide a means for us to earn fees by linking to Amazon.com and affiliated sites.

Subscribe for remodeling and renovation tips and tricks & more!